Hope in the Dark is a registered Canadian charity that serves impoverished children and their parents living in vulnerable physical and social conditions.

Our two main goals are to see their lives transformed as they come to know and follow Jesus Christ, and for them to be released from the cycle of poverty.

To accomplish this, we show the love of God in a tangible way by providing consistent aid and support through daily meals, educational assistance, and the teaching of God's word.

Hope in the Dark is directed by a group of regular individuals who are passionate about serving the poor and the voiceless, whose motivation for this ministry is to show God's love to people in need.

Hope in the Dark’s main belief is that God should be the main priority in our lives and only through the knowledge of God can a person be completely free.

Hope in the Dark strives above everything to pursue God’s will, not conforming to the patterns of this world, and seeking to become less so that Christ’s name is exalted.

Hope in the Dark believes that pure religion is remembering the widow, the orphan, and the poor. Giving to others out of the abundance we have is a responsibility since everything we have has been freely given to us by God.

LOCATION: Bucaramanga, Colombia.
COMMUNITY NAME: Villas de Girardot
This is a city in which there is a major gap between the higher affluent class and the poor who often live in marginalized and destitute areas.

A large problem in those slums in Bucaramanga is not only the extreme poverty that some of the population live in, but also the lack of affection and the numerous cases of violence and sexual abuse done towards the many vulnerable children living there.

Very often the perpetrators are their own fathers or step fathers. In some cases, these kids in their desperation turn to drugs, crime or decide to leave their home and live on the streets at a very young age.

All this stems from the fact that very often these kids live in dysfunctional families where only one parent is present and there is little to no social support available to the parents. This leaves the children vulnerable and often lacking love and affection.

We are located in a conglomerate of slums in Bucaramanga called Villas de Girardot, Camilo Torres, and Sarabanda.

In Bucaramanga, there are several “illegal” settlements where, as previously mentioned, displaced families from other regions of Colombia as well as those living in extreme poverty live.

Typically, these marginalized slums–often called “Invasiones” (Spanish for invasion or illegal occupation)–are located in the outskirts of the city and thus are lacking in the basic needs such as domestic drinking water, natural gas, sewage, and wastewater disposal. Very often, these communities do not have paved roads and only a few places have electricity. Additionally, gangs and drugs are also common in these communities.

At Hope in the Dark, we believe that only through the knowledge of God can a person be truly changed and set free. It is this transforming truth and the love of God that we want to show in a tangible way through word and action. We want to see the lives of many vulnerable children and their parents transformed by:

Providing nutritious meals, educational assistance and encouragement. A priority for Hope in the Dark is to secure school admission for children currently not enrolled is school as well as to equip illiterate children to enter school.

Supporting parents through vocational training, and the creation of small businesses. Our aim is to ensure that the parents do not develop a dependency on our help. Rather, we want to provide them with tools and opportunities to enable them to provide for their families and become contributing members of society.

Developing and broadening the children’s interests and skills through extracurricular activities such as music lessons, arts, sports, theatre, English lessons, handcrafts, workshops, etc. Hope in the Dark also carries out some additional activities such as medical and dental campaigns for parents and children.

Providing mentorship, counselling, and teaching the word of God through daily and weekly Bible classes for both children and their parents. 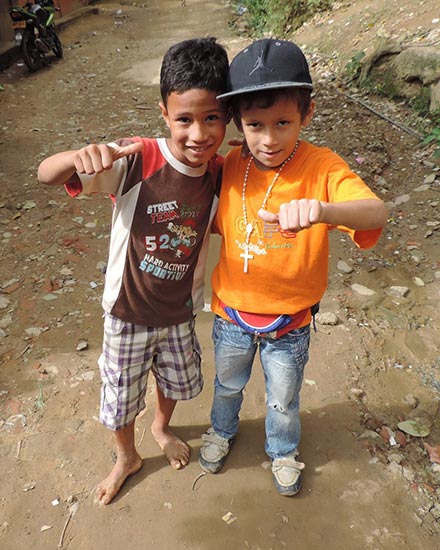 We serve children living in slums in Colombia who often face hunger, sexual abuse and, in most cases, end up in gangs, part of the sex trade, and addicted to drugs.

Teenage pregnancy and prostitution is always present in these communities.

2. The parents of these children, who in most cases, are single mothers.

To see children and families living in extreme poverty become true disciples of Jesus Christ, pursue His purpose for their lives, build stable, loving families and become contributing members in their communities.

To bring hope to children and their families by providing nutritious meals, educational assistance, sound teaching of the word of God, counselling and vocational training. By loving and caring for the children on a daily basis, we build meaningful relationships and instill in them, through words and actions, the importance of knowing God and pursuing Him.

Hope in the Dark will not incur any debts, but will only work with the resources that are available and funds that have been raised. This is responsible stewardship of the money given to us.